Yashomati Hospitals Private Limited is a Private incorporated on 16 March 2007. It is classified as a Non-govt company and is registered at Registrar of Companies, Bangalore. Its authorized share capital is Rs. 520,000,000 and its paid up capital is Rs. 291,461,408. It is involved in Human health activities. Directors of Yashomati Hospitals Private Limited are Oleg Valentinovich Lezhnikov, Olga Sergeevna Nikitina, Artur Vladimirovich Nikitin, Shaji Kannoth, Ramiah Kumar Subba, Ravi Shankerji Kesari, The Chairman of Yashomati Hospital, Mr. Artur V Nikitin from Russia was very keen to spread his business in the field of medical across India into multiple units. He also set-up a similar kind of unit at Ranchi the capital of the Indian state of Jharkhand but unfortunately not operational. Their corporate growth went high during the period from 2010 to 2013 and was in the highest level. But the organization has suffered a huge set back during the year 2013-15 due to unprofessional conduct and negligence by the previous staffs and saw the ultimate fall of its healthcare business. In the year 2017, Hence Aayug Multi-Specialty Hospital operational since 2005 chaired by Dr. Gopala Krishnan and managed by Chief Operational Office, Mrs. Uma Gopalakrishnan took over Yashomati Hospitals as a challenge with more than 10 years expertise in the medical field. Leading healthcare organizations recognize that improving care isn’t enough; having a systematic approach to sustaining improvement is equally important.

Aayug staff from various departments such as Front Office, HR, Nursing Station, Pharmacy, Lab, Accounts, Facility and Store took the initiative as the building was unused for almost two years. The building was in deteriorating condition but with the dedicated staff taking these hectic tasks, they made it operational with basics to start the hospital.

YHPL frequently liaised with PF and ESI Department staff for setting up ESI & PF contribution of all our new staff and is in process. As staffs are increasing in a phased wise manner, so we opened up corporate salary accounts with HDFC Bank and also initiated first salary payment to YHPL staff. Salary and other statutory payments were cleared on time and that there is no backlog anywhere. Rules are followed as per the Labour Rules of Karnataka for recruitment/salary/wages etc, thus the transparency is being maintained. Recruitment was another major task. The recruitment of the candidate for each department to make it function started from April 2017. With the past history of Yashomati Hospital, it was really a challenge to gain candidate confidence and ultimately the strength of staff constantly increased. Recruitment of doctors was jointly done by HR and PRO. This was a prime task of getting good and professional doctors which will be the direct effect on our hospital’s performance level. Full-fledged Departments for HR, IT, Lab, OPD, Ward, ICU, OT, Radiology, Billing and F&B Departments were thereby set up.

Efforts were not easy as the Aayug Medical Team had to clear all legal aspects first along with statutory compliances, for any organization to run with the regulations of the government body. With the strength of 111 employees, 25 in-house Doctors, 35 Visiting Consultants and empanelled with major Insurance companies and 29 TPAs, the organization went on active and functioning mode. As the developmental phase is a continuing process, it is our commitment to strive to be the finest clinical, service and operational outcomes and in providing the best care for all the requirements. 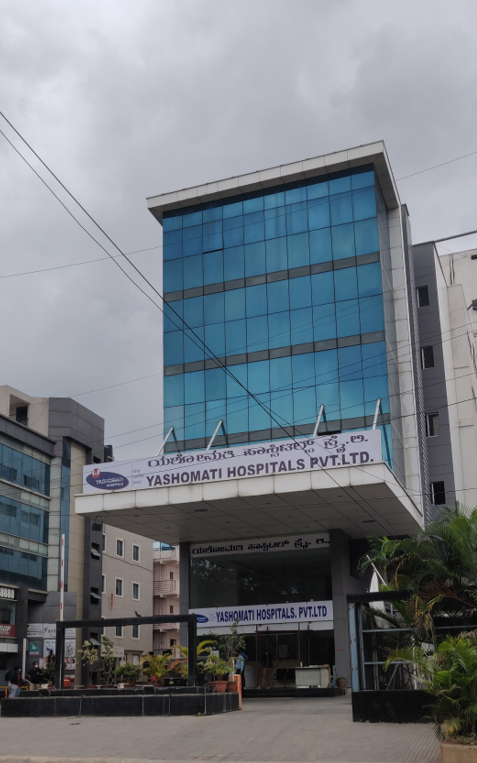 Yashomati Hospitals Pvt Ltd has been operational since October 2010 spreading over an area of 1.7 lakh Sq ft land and building owned by the company covering amenities such as: